British photographer Colin Prior in conversation with Nick Smith 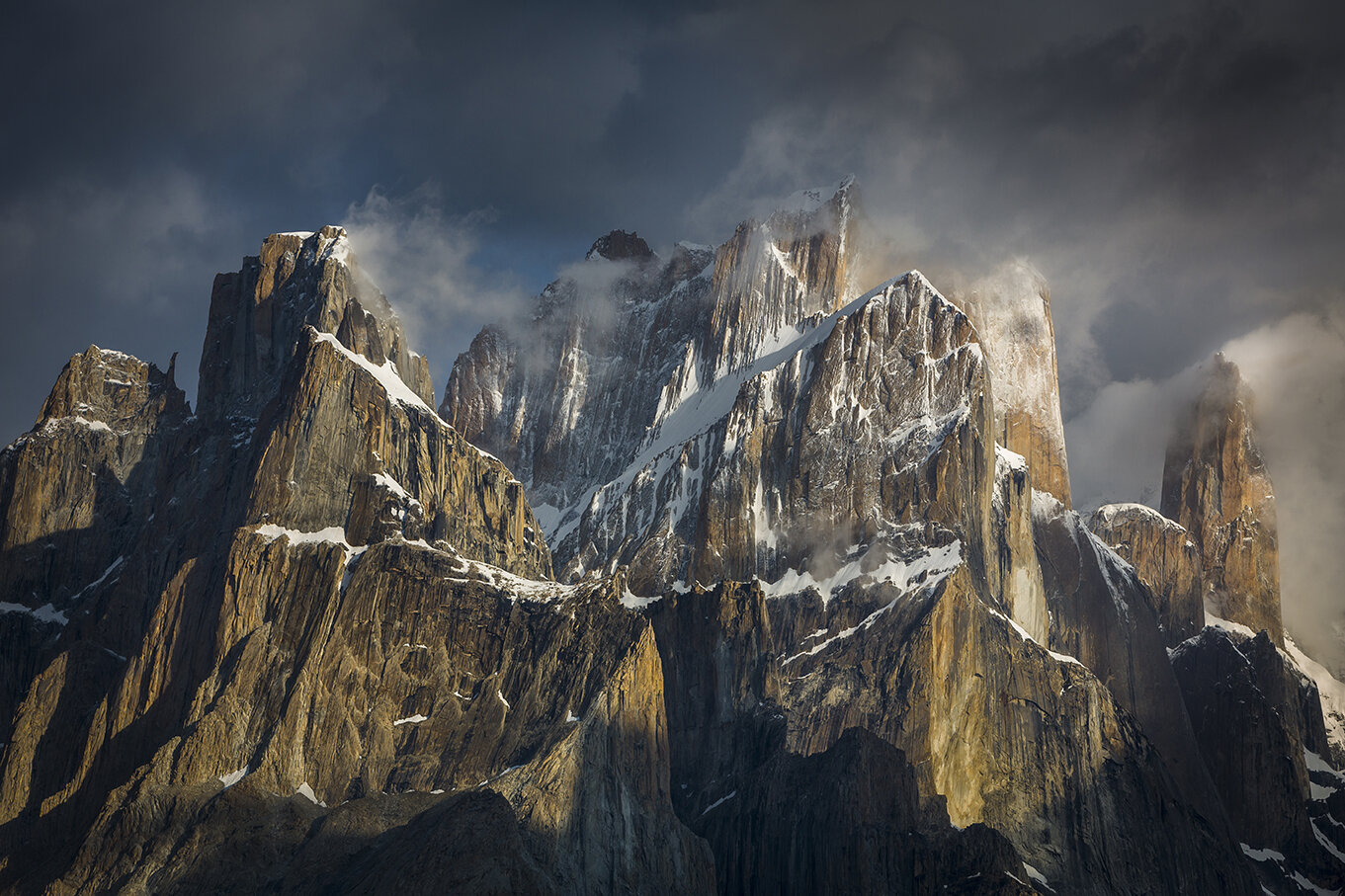 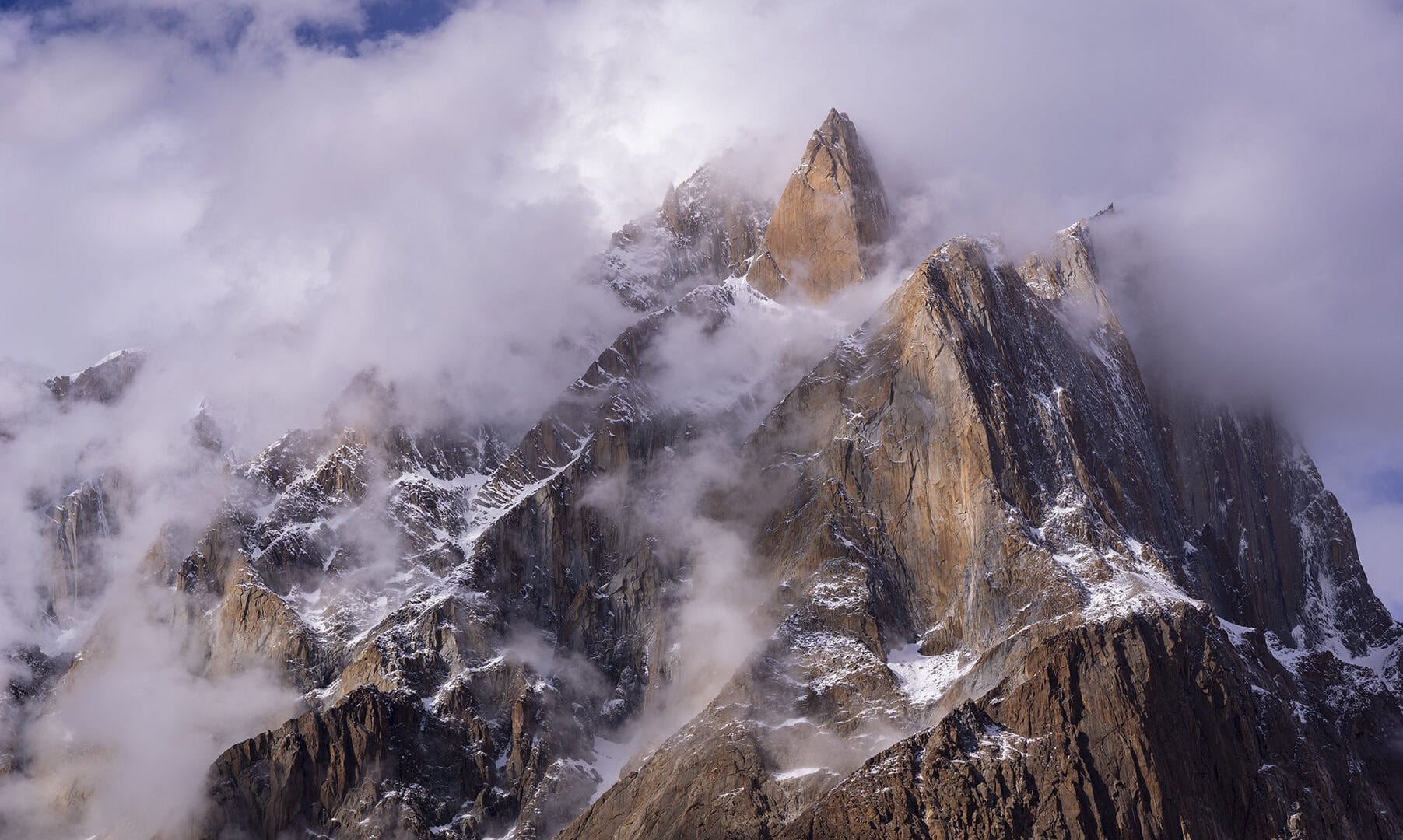 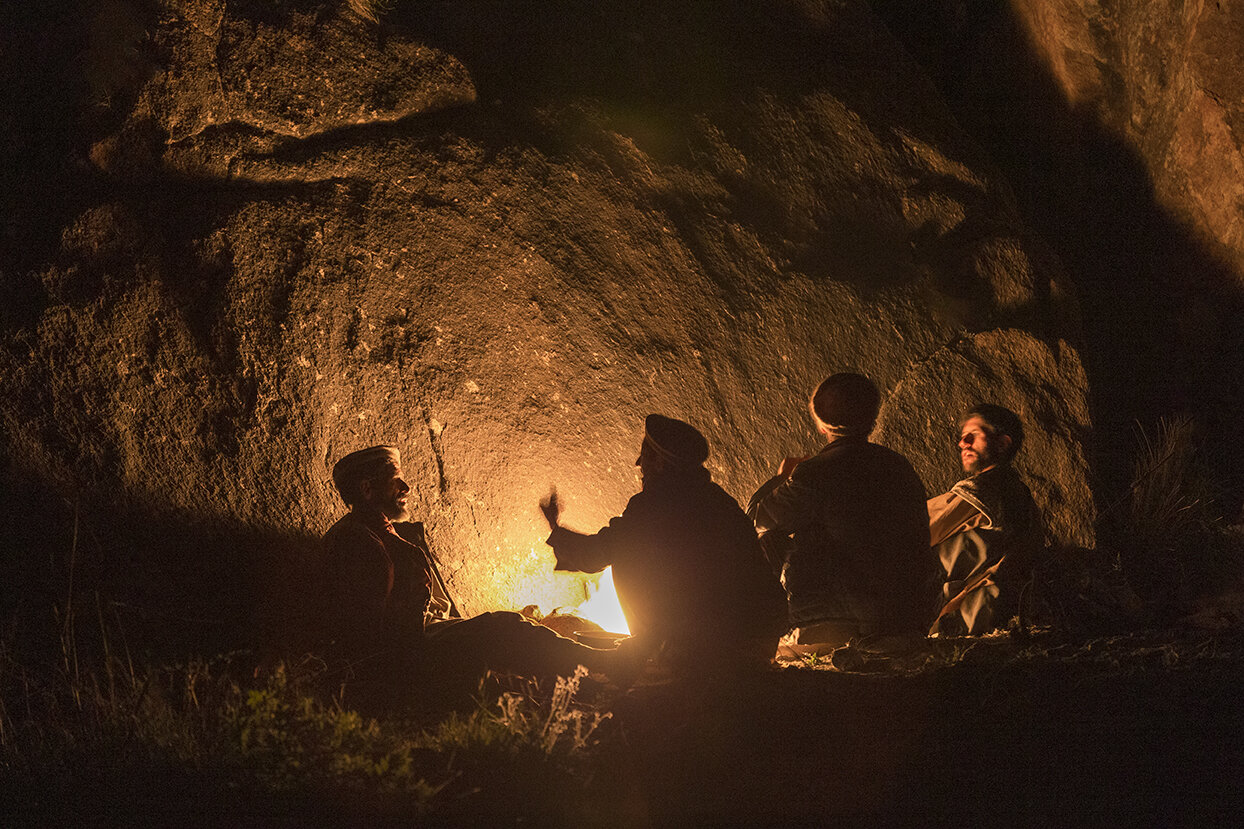 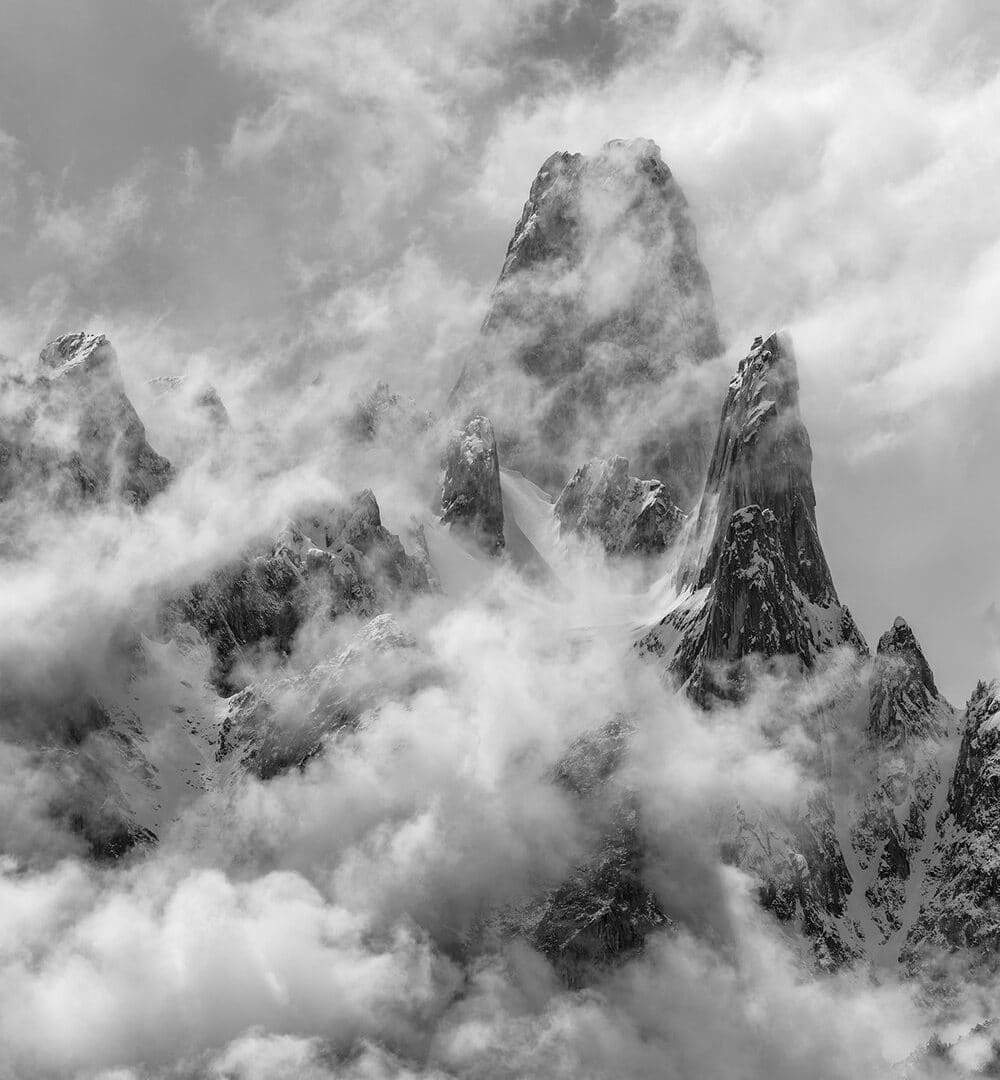 One of the biggest names in British landscape photography, “Mountain Man” Colin Prior is perhaps best known for his classic images of his native Scotland. But throughout his four-decade career he’s also undertaken numerous expeditions into the heart of Pakistan’s Karakoram range, which he describes as “one of the world’s greatest natural treasures.” Home to the fearsome K2—the second-tallest mountain on Earth—the Karakoram is part of a complex of Central Asian ranges that includes the Hindu Kush to the west and the Himalayas to the southeast. But for Prior, these mountains are different, gaining their distinct visual attraction from being located in the most glaciated region on the planet outside the polar regions. While most of the world’s 8,000-meter peaks are snowcapped, the same cannot be said for the Karakoram’s four summits exceeding this height due to the sheer verticality of their faces. In short, “they rapidly shed their snow, leaving their jagged outlines glistening in the sun.” As Prior notes, the name of the range, first noted in English writings of the early nineteenth century, means “black gravel” or “black pass.” It is this contrast of rock and ice, as well as the geological “architecture” of the mountains that has become an obsession for the photographer.

Now in his sixties, Prior first visited the Karakoram almost 30 years ago, after becoming inspired by Galen Rowell’s photographs of the 1975 American expedition to K2. He remembers being “instantly captivated by images of the sharp, fractured peaks and vast glaciers.” His new, large-format book, The Karakoram: Ice Mountains of Pakistan, is the definitive collection of images from his six expeditions to a region so remote, and in conditions so hostile, that Prior compares the preparation and planning that goes into each visit with that of a military campaign. The reward for months of trekking with teams of porters and ponies has been time in the wilderness, exploring “the ultimate mountain landscape, sculpted by wind and ice into monumental spires, towers and pyramids.”

Nick Smith: You have a lifelong passion for the Karakoram mountains. Where did this come from?

Colin Prior: I think that what inspired me initially was Galen Rowell’s book In the Throne Room of the Mountain Gods that set alight something in my mind that is still burning there. When I saw his photographs of K2 I thought: “what sort of place is this?” It almost looks like it’s out of Tolkien’s The Lord of the Rings. Sometimes you see these images and they look computer generated, they’re so striking. So, I thought that you’ve got all the raw material in the landscape and a good potential for very strong photography. I tried to gather as much information about the region as I could. But there’s been very little published on it. Apart from Rowell’s book and another by a Japanese photographer, you’d have to go back to the nineteenth century to Sir Martin Conway’s Climbing and Exploration in the Karakoram-Himalayas, published in 1894. Then the next big expedition was the Duke of the Abruzzi’s in 1909. Again, there was a big expedition book published thereafter that had fantastic images by Vittorio Sella, who was really one of the pioneers of mountain photography and someone who was a source of inspiration for Ansel Adams.

NS: Is the Karakoram still one of the least-visited mountain ranges on the planet?

CP: Well, it’s changing now. But given the visual assets that are in the region, it’s quite amazing how undeveloped it is. There’s very little tourism there, and the tourism that is developing is in the form of affluent Pakistanis who are beginning to take an interest in their own country. Obviously, there are hardcore climbers that want to do the 8,000-meter peaks, and they are really the only people who have been going in there over the past century. K2 is a great proving ground for climbers because it is far harder to climb than Everest. But the region is quite inaccessible. It entails flying to Islamabad, and if you’re lucky you’ll be able to fly to the market town of Skardu where expeditions get supplied. If the cloud-base is down, which it is more often than not, you’ll end up having to drive up the Karakoram Highway for 22 hours. It’s a dangerous journey: you’re clinging onto a little ridge that’s been blown through the mountain with the raging torrent of the Indus River 100 meters below you.

NS: What’s the balance between your thirst for adventure and your hunger to get the photographs?

CP: What drives me is the quest to capture these images. The mountains are individual sculptures, and I’ve identified over the years which mountains in which areas I want to photograph. There are two main glacier systems in the Karakoram that have the best photographic potential: the Baltoro and the Biafo. And it is the character of the mountains in these regions that has taken me there again and again. The towers and spires. It’s about the right light, the right time of year.

NS: What sort of exploration skills does a mountain photographer need?

CP: If I look back to my early work photographing the Scottish mountains, I was hiking and camping with more than 20 kilos of gear on my back. For that region, you could call it extreme photography. It’s not a picnic. You’ve got to develop skills that ensure you’re comfortable with the outdoors. Don’t forget that the guys you’re working with in the Karakoram are real mountain men in the true sense of the word. They’re basically subsistence farmers who are supplementing their income by guiding. For them, being out on these treks is second nature, so for someone like me the key is to have a small team that you’re familiar with.

NS: What other sort of hazards are there?

CP: If it’s been raining torrentially for a few days the roads can be closed off due to landslides. It’s inevitable that there will be big rock falls, even when it’s dry. The porters are often in the back of open jeeps, and there are places where you have to stop so that they can get out and run as fast as they can to avoid the stones that are falling from thousands of feet above. They come at you like bullets. But you get used to it because that’s just what you have to do. You just get on with it. When you’ve been there a long time you start to realize that this is what the Karakoram is like.

NS: What is the standard of mapping in the Karakoram at the moment?

CP: Just in the past couple of years there has been a map produced that is quite excellent. I’ve got all the maps that have been published, and a lot of what was done 10 or 20 years ago are not hugely accurate. But there’s one that you can get in the marketplace at Skardu that covers all the regions that you need. That map has been a massive help. But basically, I’m depending on the guide’s knowledge of the places we’re going to.

NS: After all the planning and effort, have you ever found yourself unable to take photos?

CP: You’re going to get blank days when, after everything you’ve been through, you simply don’t have the right conditions to take the photos you want. That’s for certain. In 2014, I went out there and I did get photographs, but not all of the images that I had planned. Which meant that I’d needed to come back to get them, which is what I did in 2019 when I had fantastic, amazing conditions for photography. But I nearly ended up in a crevasse on that expedition. I broke through a snow bridge, but my rucksack got caught and stopped me falling in.

NS: Do you think that all the hardship, time, and expense has been worth it?

CP: Oh yes. What an experience to have had. To have been able to go out on these glaciers in very much the same way as the explorers of the late nineteen century did is a real privilege. Especially as there is no-one else there. Once you leave the village of Askole, which is where most expeditions start from, you’ll not meet another person until you return. I mean, that sort of opportunity is so rare anywhere else in the world. You’d never be able to do that in the Himalayas these days. So, I’ve been very fortunate. But it’s a bit like Apsley Cherry-Garrard’s experience in Antarctica, isn’t it? It’s okay to freeze your backside off, so long as you’re happy with the idea that all you want is a penguin’s egg. All I wanted was some photographs. But it was also more than that. These trips helped me to discover myself, and so few people in the future are going to get that opportunity.