​ Into Uncharted Territory | The Explorers Club ​ ​ 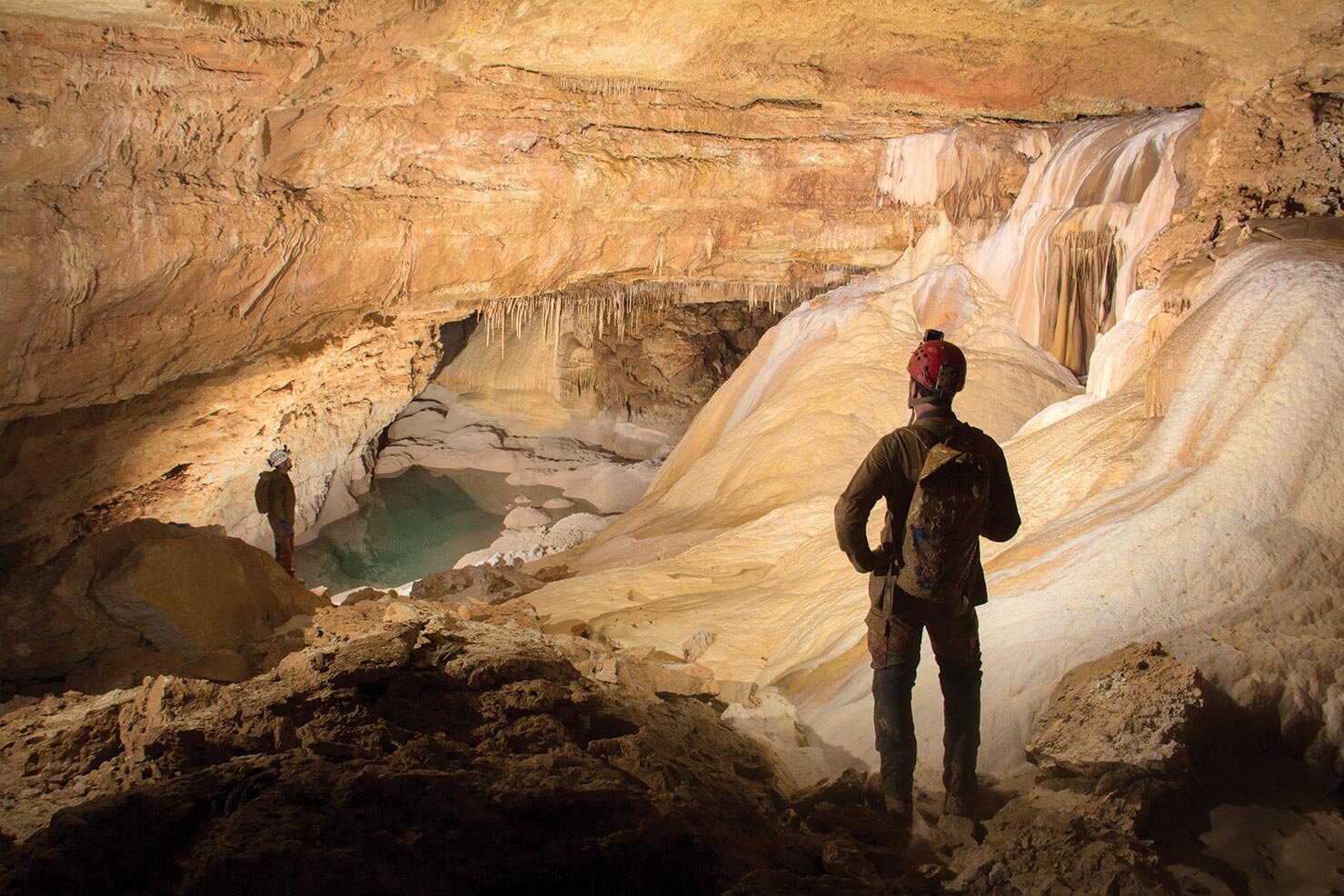 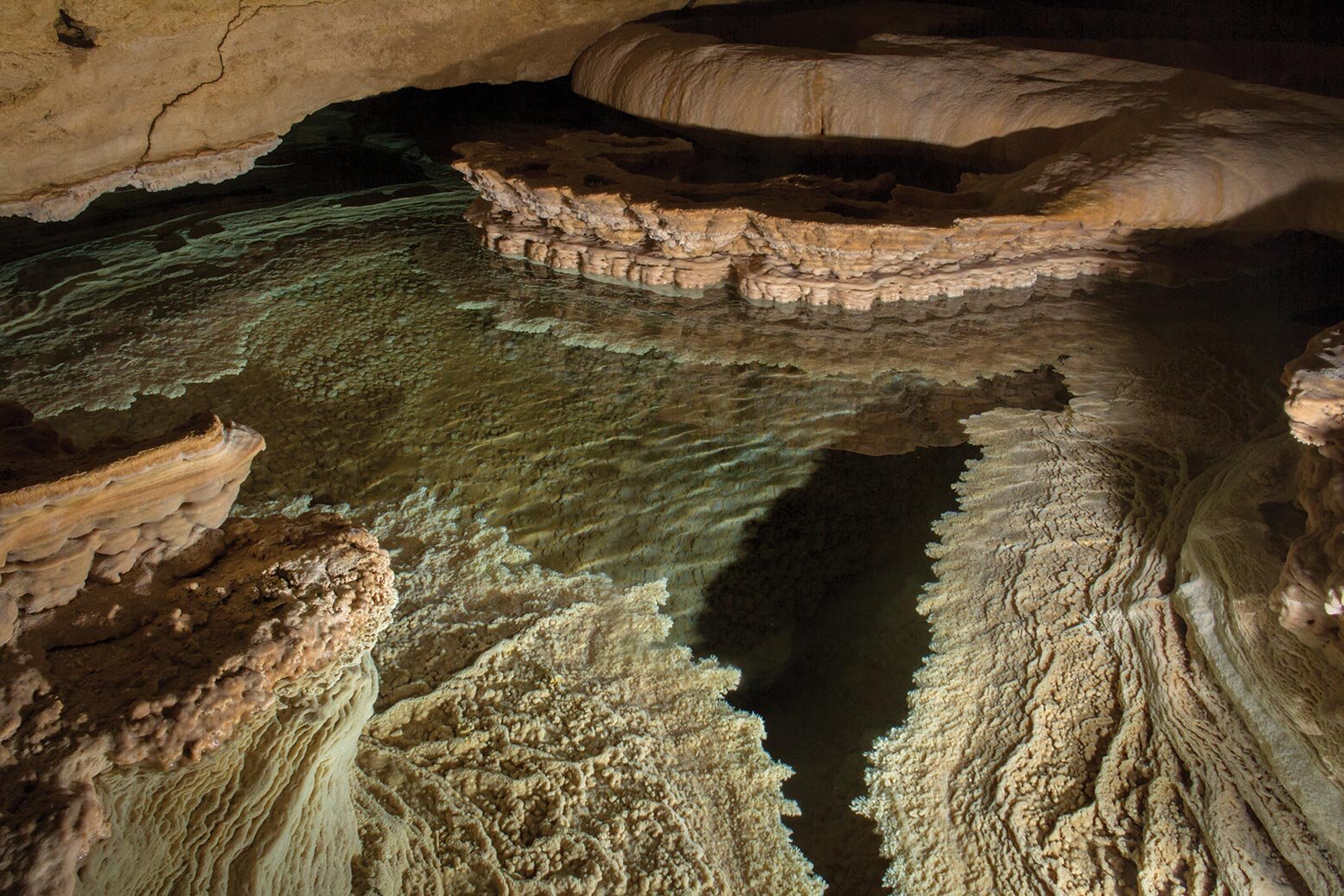 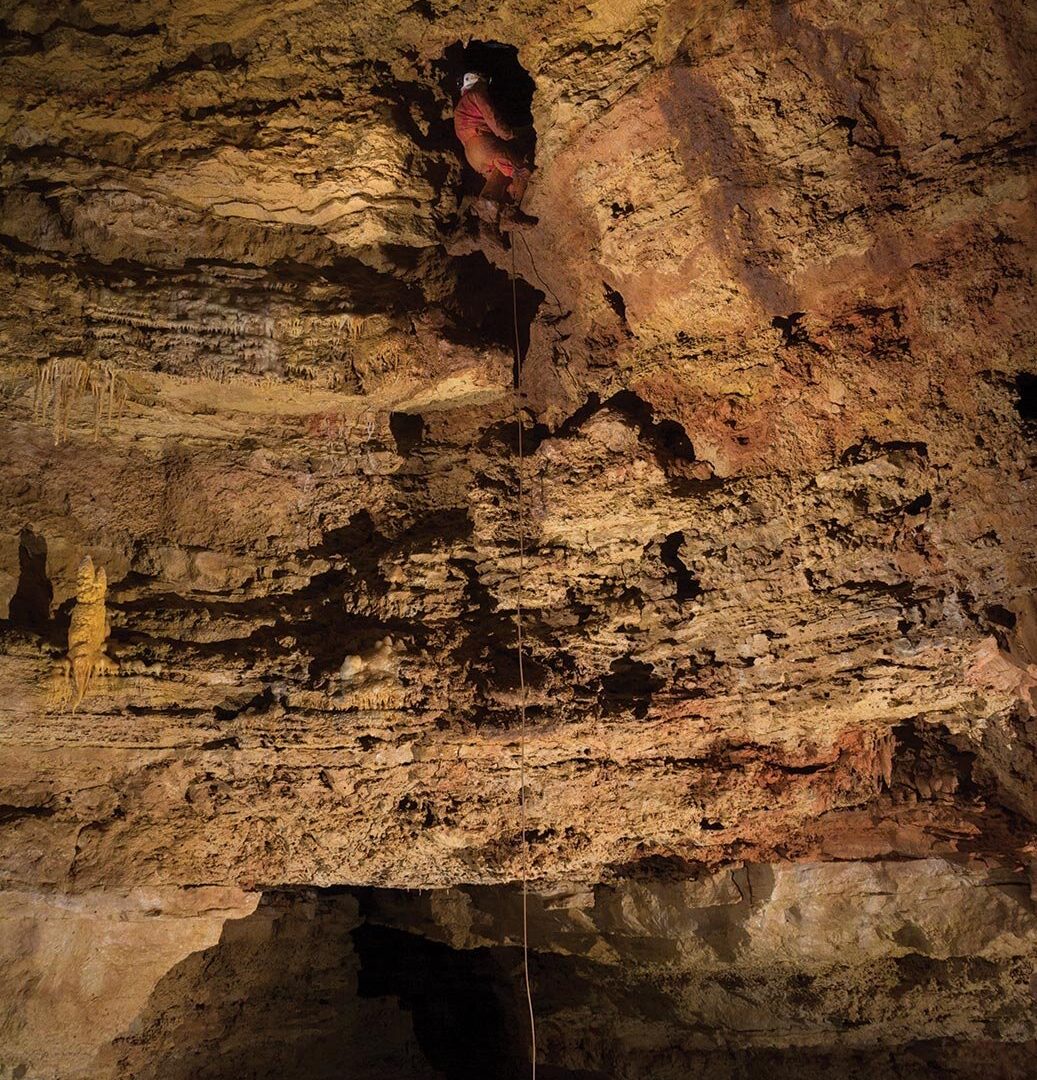 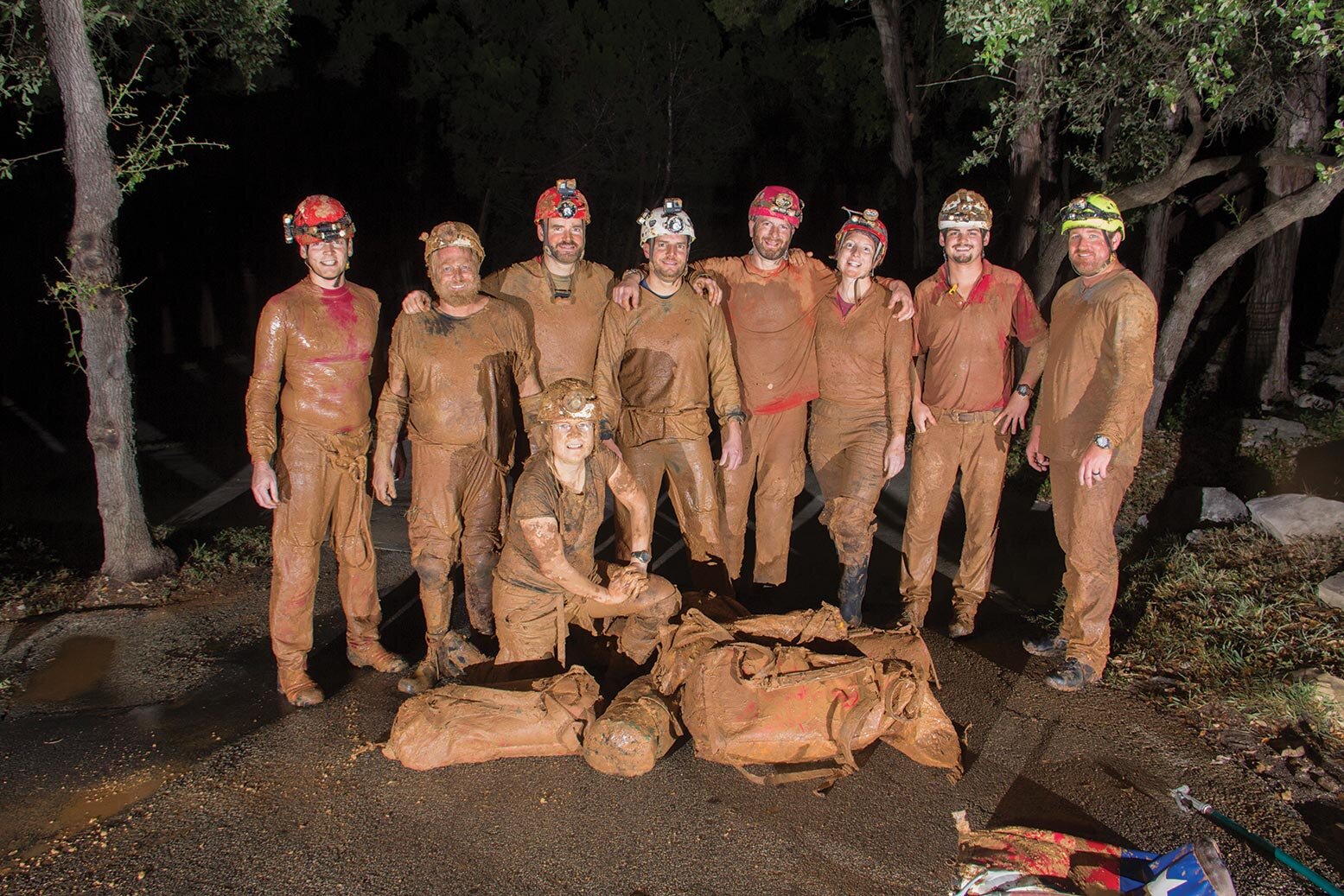 A fellow of The Explorers Club since 1979, C. William “Bill” Steele has ventured into some of the deepest caves in the world, including Sistema Huautla in the Mexican state of Oaxaca, where he has led more than a dozen Explorers Club flag expeditions over the past four decades. Since 1970, Steele has been involved in the exploration and mapping of Mammoth Cave in Kentucky, the world’s longest cave. A leading cave photographer, Bennett Lee started caving as a teen with Bill Steele some three decades ago. For more of his work, visit: bennettlee.com.

Had the spring field season gone according to plan, I would have been heading back down to southern Mexico with my fellow cavers to continue our push ever deeper into Sistema Huautla, which, at 1,560 meters, is the deepest cave system in the Western Hemisphere. Since 1980, I have led more than a dozen Explorers Club flag expeditions into Huautla. This year, I was to have been joined by a team of 27 of the world’s top speleologists and scientists from five countries. With the coming of the Covid-19 pandemic, however, we were forced to scrap our April-May expedition two weeks prior to departure.

With my international travel feathers temporarily clipped, and not one to sit idly by, I decided to turn my proverbial headlamp back onto speleological treasures closer to home—in this case, a world-class “show cave” known as Natural Bridge Caverns (NBC) on the outskirts of San Antonio, where last summer we discovered some 500 meters of previously unknown passageways. These are the first to be found since the Texas Hill Country cave was designated a National Natural Landmark in 1971, and, it is funny to think, they might never have been found had it not been for chance discussion with fellow caver and a friend of many years, Orion Knox, during an outing of the Texas Chapter of The Explorers Club in October 2018.

I had been invited to present the latest findings from Sistema Huautla at a lecture-dinner, which was to be held in Longhorn Cavern State Park, an hour and a half northwest of Austin. In addition to touring the Longhorn caves before dinner, I suggested to the event organizers that our members might enjoy a full day of caving if we included an optional midday trip to NBC, a 90-minute drive away. If so, I would be delighted to see if we might be led through the caverns by none other than Orion Knox, who, along with three fellow St. Mary’s University students—Preston Knodell, Al Brandt, and Joe Cantu—discovered NBC in March of 1960. (In a “normal” year, the caves, which were opened to the public in the summer of 1964, attract nearly a half-million visitors.) Orion graciously agreed and a tour was arranged.

Upon our return to the visitor center after the excellent tour, my partner Diana Tomchick spied a map of the cave on the wall and gleefully asked Orion if there were any remaining passages to be explored. With a slight smile, he pointed to a place on the map marked the “Dome Pit,” which, at 30 meters in height, was one of the tallest chambers in the cave. Orion suspected that there may be a passage near its ceiling but, when it was surveyed back in the 1960s, the cavers’ carbide lamps were not bright enough to see if there was a passage leading off from the top of the dome. He also explained that the limestone walls of the chamber were soft in places, making it difficult, if not impossible, to climb. My curiosity piqued, I smiled at Diana. Without saying a word, we knew it probably could be climbed by someone with the right skill set.

In the months following our visit, Orion put me in touch with Brad and Travis Wuest, third-generation owners of the caverns, which are located on private property, and we were able to arrange a trip to check out the Dome Pit firsthand.

In February 2019, Diana and I returned to NBC, armed with our powerful Scurion headlamps, which were sure to provide far better illumination than had been used in the cave before.

We met up with the Wuest brothers and two of their NBC guides and surveyors, Justin Royce and Dillon Ellis, and set off for the Dome Pit. Passing beyond the exit tunnel that marked the end of the paved tourist trail within the cave, we went over a handrail, down a flight of concrete steps, and into a suite of undeveloped passageways and chambers, including a massive one known as the Inferno Room, which is filled with blocks of rock and dangling speleothems. Within minutes we found ourselves squeezing, climbing slippery muddy slopes, stoop-walking, belly crawling, and working our way through constrictions, which necessitated contortionist moves. An hour and a half later, we reached the Dome Pit—a sheer drop into an enormous chamber. A rolled-up cable ladder was rigged, and each of us was belayed down to its base.

The light-colored limestone walls of the Dome Pit towered more than 30 meters to a flat ceiling. Our bright Scurion headlamps lit up the chamber and it appeared that indeed there was a large passage at the top, which could be reached by a skilled cave wall climber. I had just the right guy in mind—Lee White, who had been a key member of our Sistema Huautla team since 2017.

Eager to explore uncharted chambers in the cave on their own property, the Wuest brothers expressed interest in our relatively high-tech gear and asked lots of questions as they would need to be better equipped and better trained if they were to be part of our exploratory team pushing deeper into the cave system. I told them not only about our Scurion headlamps, but also about Gonzo Guano Gear and our frog vertical climbing system; CaveSkinz pants and jackets; and, lastly, shared a favorite gear source, On Rope 1, for the right kind of pack, etc. They kept notes.

Based on this new information, we made a plan to return to the Dome Pit with Lee White in early May, once we had concluded our spring Huautla expedition. While we were in Mexico, I got an email from the Wuest brothers who said they had returned to the Dome Pit with a drone operator who flew his drone up to the ceiling and into the passage at the top. They said there were large stalagmites and it looked good.

As planned, Lee and I made our way to NBC and into the Dome Pit in early May. We soon realized that climbing it was a bigger deal than we envisioned. We were also aware that the unexplored passageway had the potential to lead to exciting new cave chambers.

After an early morning planning session on May 8, our group of 20, including a video team and a drone team, entered the cave. Upon arriving at the Dome Pit, Lee immediately scanned the walls with his bright headlamp and eyeballed his route. He chose to go directly up the left wall to the passage above. There was a ledge that could easily be reached about 5 meters up where he planned to place his first bolt. With me belaying him, he would carry the end of a static caving rope with him that would be fed out as he climbed.

Two drones buzzed around Lee, shooting video and still photos as he steadily drilled and hammered bolts during his ascent. In an hour and a half, he was at the top, and shouted to us down below, “It goes!”

Lee pulled up the belay rope, rigged the static rope, and rappelled back down, removing the hangers as he did. Then six of us (the Wuest brothers, Lee White, Bennett Lee, Justin Royce, and I) climbed the rope one at a time and went off into virgin cave passage.

The passage was a canyon consistently 5 to 6 meters tall and 2 to 3 meters wide. The ancient mud on the floor stuck to our boots and caused them to become heavy. Nearly 200 meters in, we came to a pit in the floor  and the passage continued beyond it. By the time we wrapped up this first foray and exited the cave it was 1:30 in the morning.

While we were in the passages, the Wuest brothers collected samples of bat guano to date the bat activity in these passages. One guano sample dated to 7,500 years and a second to 6,400 years ago. These dates match archeological dates of a known collapse at the entrance, at which time access by bats was likely blocked. A third guano sample taken in the main show cave reveals bat activity as far back as 15,000 years ago. Formation of the cave system began some 10 million years ago.

The following month, while I was continuing to survey and map new passages in Mammoth Cave, the longest known cave in the world, the Wuest brothers went back to the Dome Pit passage and continued to push deeper into the upper level canyon, which went about 100 meters farther, before terminating in a “T” intersection that ended both to the left and the right. To the left it dropped down into a room, but there was no way to continue out of it.

Brad also descended the pit in the floor of the passage, which turned out to be around 30 meters in depth. It dropped into a nice-sized passage with rimstone dams, pools of crystal-clear water, and large stalagmites. Given the pristine and non-muddy nature of the pit, future exploration will require a clean change of clothes and shoes, with muddy clothes, boots, and climbing rig to be left at the base of the rope. It was clear that the passage opened up with impressive formations much like the ones for which the show part of the cave is known.

On July 27, Diana and I returned to NBC along with two cave mappers—Andrea Croskrey and David Ochel from Austin. We teamed up with the Wuest brothers and other fellow cavers, including NBC staff geologist Brian Vauter, to carry out a proper survey of the newfound passageways. In addition to mapping and photographing what had already been explored, we would lay the groundwork for a 3D-LIDAR scanning team, which would be coming in later.

Having entered the cave at 10:30 a.m., we emerged starving and exhausted some 18 hours later. Fortunately, food and beverages awaited us back at the garage by the visitor center, where we washed off our gear and told tales until daybreak.

Since that mapping mission, we have returned to the cave several times with plans to continue our push into the system later this fall with more than 600 meters of new cave passages having been explored and mapped since our initial entry in 2019. And our excitement continues to build about NBC’s potential, tempered only by the sudden loss of Lee White. In September 2019, the best cave wall climber in the world was tragically killed in a car crash at age 31. We plan to carry on his unbridled spirit as we continue to explore one of Earth’s great geological wonders.

PreviousThe Magic of Mushrooms
NextFar More Than Being First