text and images by Dave Hodge 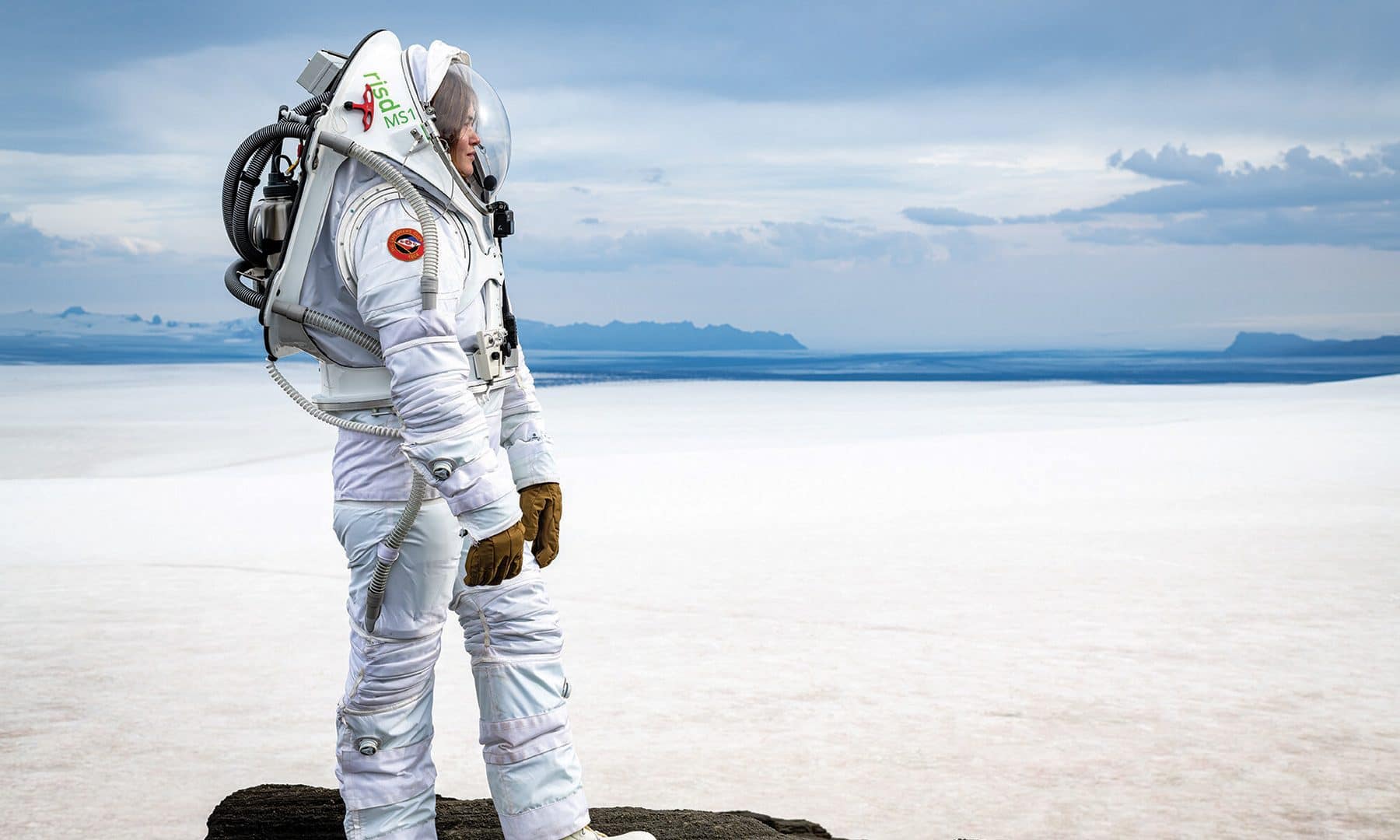 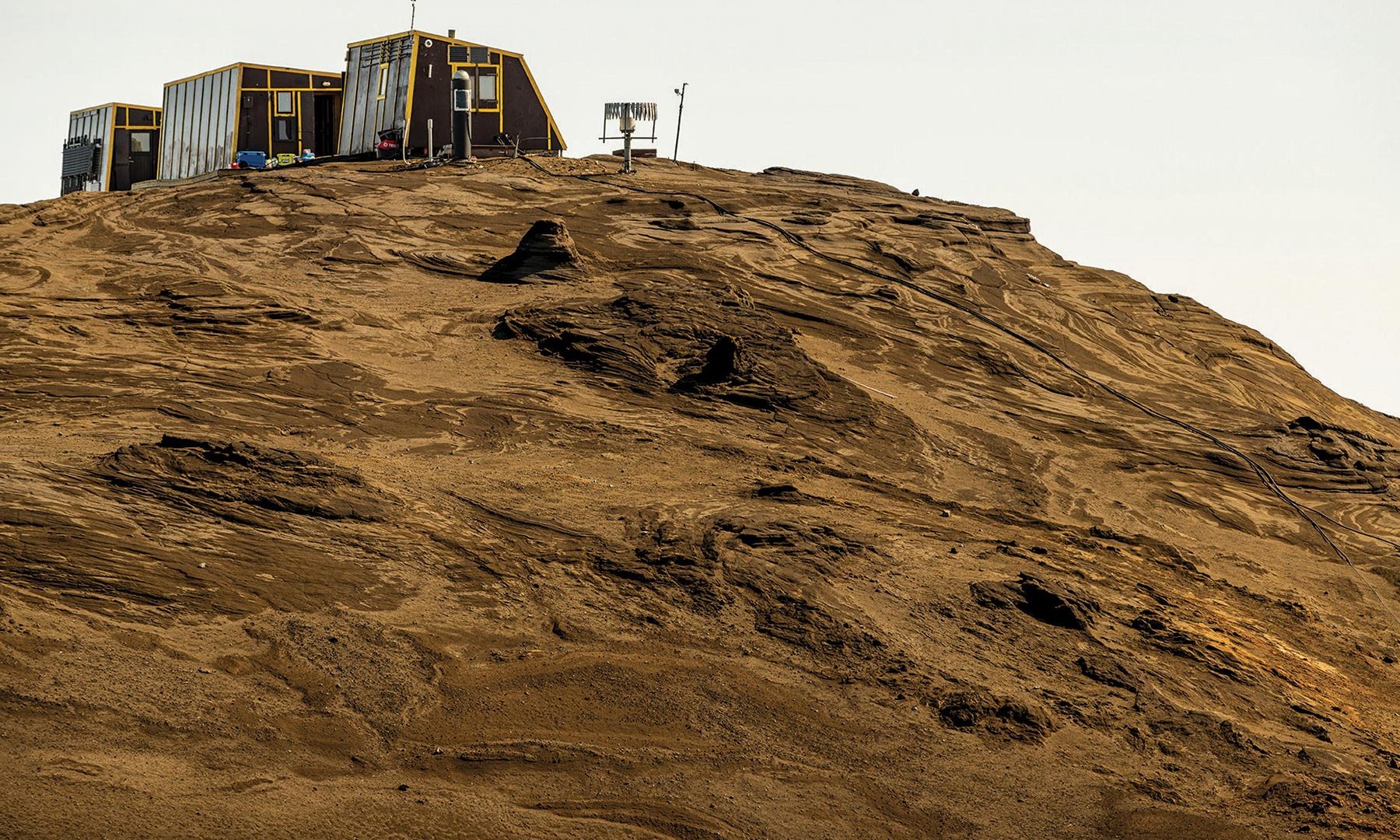 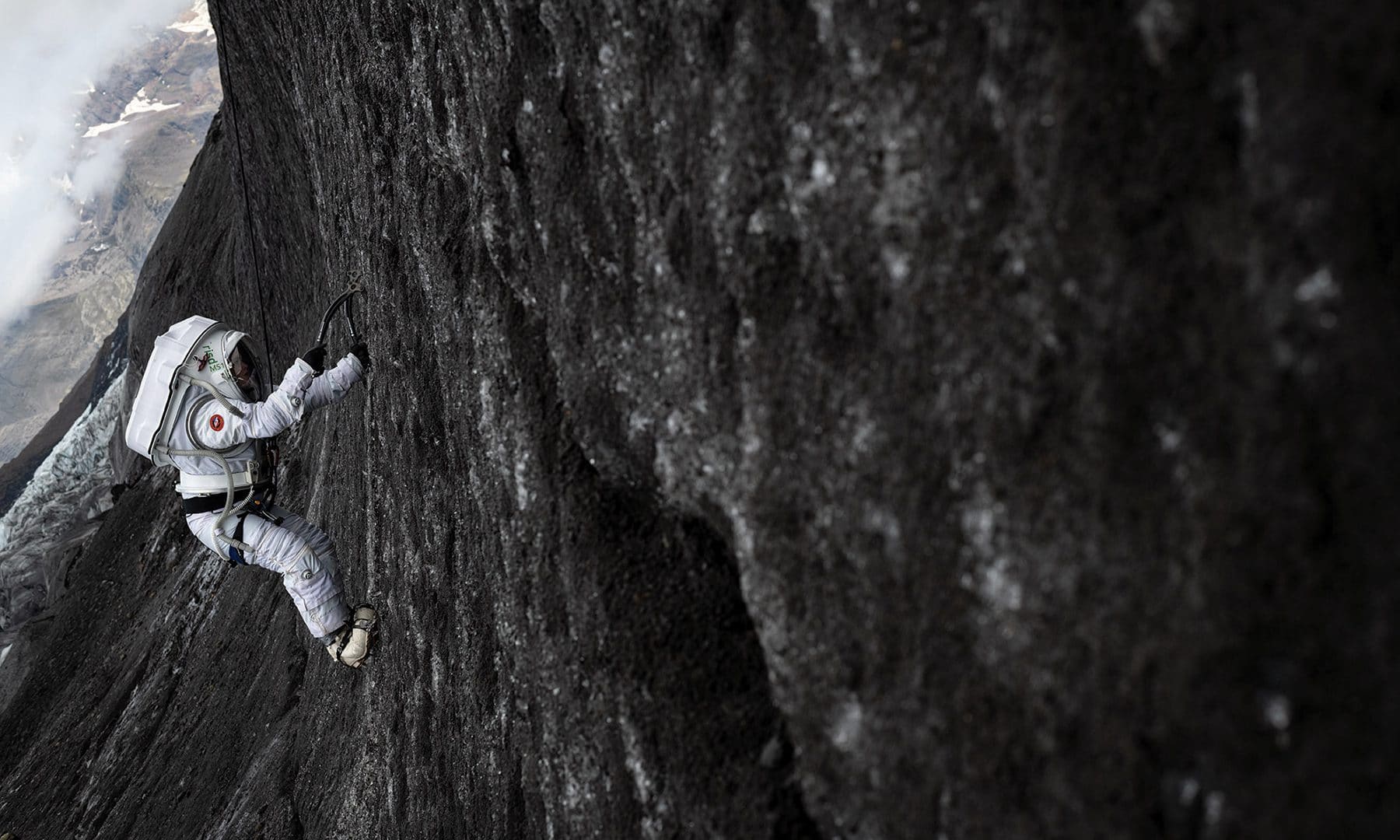 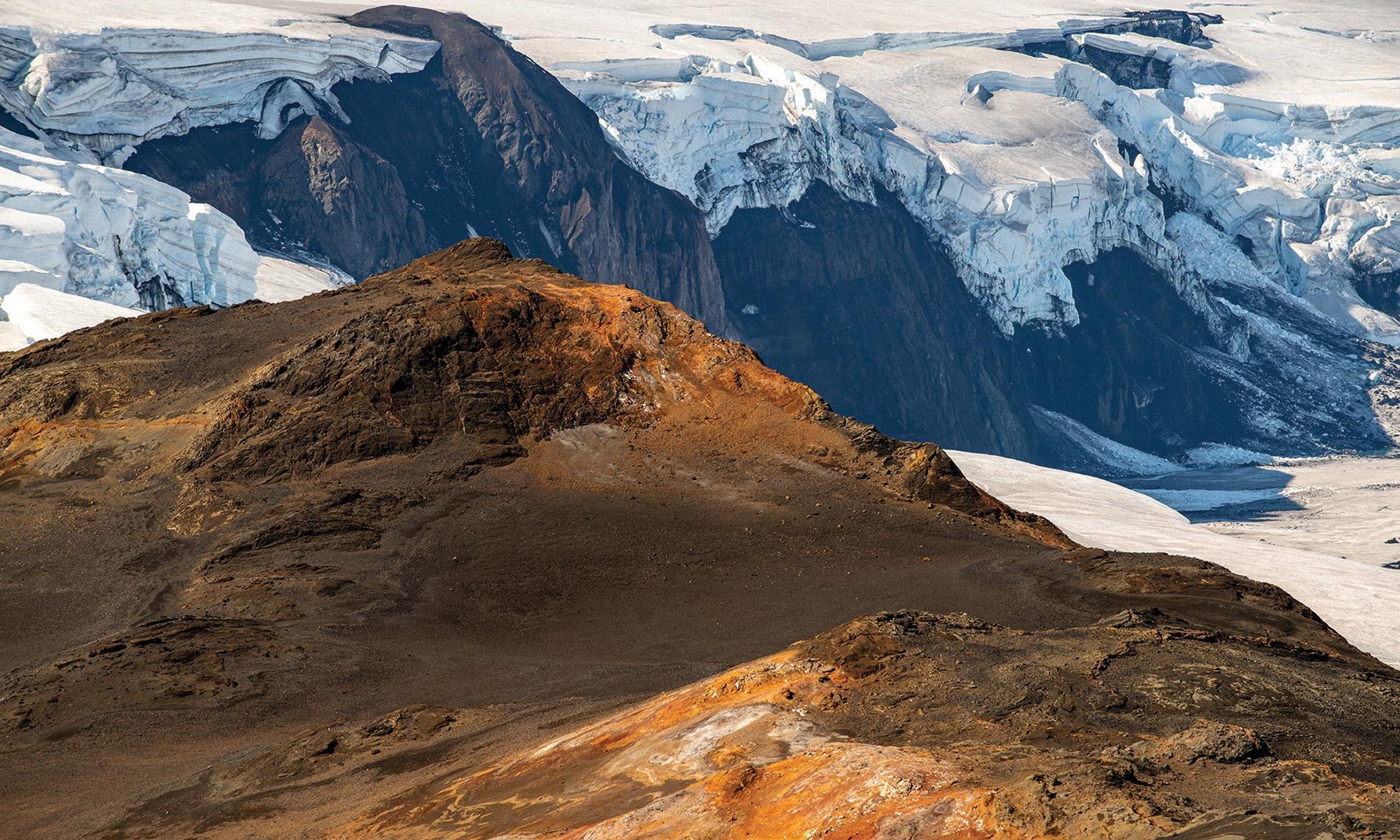 A member of The Explorers club since 2017, Dave Hodge is a well-traveled adventure photographer, musician, and founder of Unexplored Media, an agency working with brands focused on innovation and design for a better planet. His recent adventures have included diving with sharks, tagging turtles, and executive producing a film on prominent Native American leaders.

With an otherworldly landscape forged by fire and ice and largely devoid of landmarks and vegetation, the island nation of Iceland has proven to be an ideal laboratory for the development of new technologies in the realm of space exploration—for it is an Earthly analogue for the terrain found on the Moon and Mars. It was on the lava flows of the country’s windswept highlands that three dozen Apollo astronauts honed the skills necessary to work on the Moon in the 1960s and ’70s. NASA has since resumed its activities here, recently putting a prototype of a self-driving rover slated to land on Mars in 2021 through its paces.

So it seemed only natural that we too would set our sights on Iceland’s glaciers, volcanoes, and lava fields to try out the MS1, a revolutionary spacesuit prototype designed for simulated missions to Mars. The suit was designed by Michael Lye, a NASA consultant and a professor at the Rhode Island School of Design (RISD), and completed with the assistance of his students.

Such suits will be key to human survival on the Red Planet, given its relative lack of atmosphere, the composition of that atmosphere, and the extreme temperatures we will encounter. The Martian atmosphere is but 1 percent as dense as Earth’s, and that 1 percent is largely made up of carbon dioxide with only traces of oxygen. While temperatures average around -46°C, they can plummet to -143°C at the poles in wintertime and soar to around 35°C midday near the equator during the summer months.

The MS1 is designed to keep enough pressure on the human body so that it functions normally and to provide a constant supply of breathable air. It also enables its wearers to maintain a comfortable body temperature via its heating and cooling systems. The suit also compensates for other factors such as the lack of water in the Martian atmosphere (we would dry out very quickly) and ambient dust. Dust storms composed of very fine particulates, which are common on the planet, can cause serious health problems and adversely affect mechanical systems.

The target locale for testing the MS1 was Grímsvötn volcano, where we planned to spend a week living and testing the suit inside the caldera rim. The goal of the expedition was to conduct field research in and around a subglacial lake at the foot of the Grímsvötn volcano, which is located on top of the Vatnajökull glacier. With its extreme isolation, the location also provided an important psychological analogue, enabling us to carry out a study of humans who have been confined in extreme environments.

Our eight-person team met up in Reykjavík, where we picked up supplies and a fleet of Arctic trucks, custom-modified Toyota Hiluxes and Land Rovers designed for glacier crossings. Fully provisioned, we set out along the Ring Road to the accessible terminus of the Vatnajökull glacier. Knowing there would be close to zero visibility upon our arrival at the glacier, we had arranged for two snowmobile guides to find a safe route across it up to the volcano. After a slow and steady pace, to avoid a series of deep crevasses, we arrived at Grímsvötn’s crater rim. We hiked up and made camp in a suite of research huts, which would be our home for a week.

While the huts are rather spartan in their appointments, they are geothermally heated by steam generated by the volcano, supplied by pipes drilled straight into the ground. The heat also enabled us to melt snow for drinking water and washing dishes.

As Lye explained it, the MS1 suit is intended for two purposes: the first is to provide a high-fidelity simulation of what it would feel like to explore Mars in terms of dynamic constraints, muscle loads, energy expenditures, and other related factors. In other words, the higher the fidelity of the analogue experience, the better and more useful the data that can be gleaned from such field studies. This is especially important in light of other current Mars analogue operations being carried out. These include NASA’s BASALT (Biologic Analog Science Associated with Lava Terrains) studies in Idaho and Hawaii and the Austrian Space Forum’s AMADEE-18 studies in Oman, as well as the long-duration psychosocial evaluations being undertaken by the University of Hawaii’s at its HI-SEAS habitat on Mauna Loa. It was at HI-SEAS that the MS1 was put through its first tests to evaluate its elaborate cooling system, which would be needed during hot weather.

On this mission, our main objective was to see how the MS1 performed in cold weather: the suit’s ability to maintain a comfortable body temperature while providing adequate airflow for the required CO2 washout of the helmet visor, to prevent buildup of CO2 and its associated toxicity.

According to Lye, a second purpose of the MS1 suit program is to develop additional approaches for sizing spacesuits to allow for better fit and more effective long-duration wear during surface exploration. “Human-crewed Mars missions will inevitably require a wider variety of sizes of spacesuits to accommodate the increasing anthropometric diversity of the crews,” he says, adding that, “the potentially years-long duration of Mars missions and the increased emphasis of human-based surface exploration of the planet will require significantly increased levels of fit to ensure maximum productivity and minimize chances of injury, not to mention durability.”

Our field trials consisted of both fit and operational testing of all the systems, while undertaking what Lye calls “representative exploration activities.” These included traversing rough terrain, operating vehicles, collecting samples, setting up LIDAR mapping equipment, and climbing up and down steep rock and ice walls. Much to our delight, the suit fared better than expected with no significant failures of any of its systems. Moreover, it was easily adapted to fit the varied physiques of the team members of this mission.

“The testing showed that while the MS1 behaved as expected, unsurprisingly, there were many areas that could be improved,” Lye says, ticking off a couple of major concerns, namely fogging of the visor due to CO2 washout in cold temperatures and a need for more battery power. Although testing occurred on the ice cap and glaciers, the temperatures, which hovered above -18ºC, were not as cold as might be encountered on Mars. As Lye explains it, scrubbing the CO2 from the visor, which is extremely important, requires significant airflow to accomplish. If the air coming into the visor is too cold, it can cause damage to exposed skin and eyes as well as the lungs. Real-time tracking of CO2 and adjusting airflow velocities and distribution may become necessary for colder temperatures as will heating and moisturizing inflowing air. This demands greater anti-fogging capabilities in the visor, and, in turn, greater battery life and capacity if explorers are to carry out six-to-eight-hour EVAs in extremely cold weather.

As was noted in our field testing, the suit power requirements increase with colder temperatures, the same conditions that cause batteries to lose capacity. This becomes a challenge to provide enough power without increasing the weight of the suit beyond what a planetary exploration suit would weigh on the surface of Mars, which has roughly one-third the gravity of Earth.

Overall, the mission was a success. Lye had collected the data he needed to make the necessary MS1 suit improvements. And by Pothier’s assessment, the team itself fared well from a psychological perspective, living in relative harmony in a confined space in harsh conditions inside the crater rim.

As I walked around the volcano in Iceland, wearing the MS1 and collecting data on how it worked, I started to realize that this was not only an analogue suit for Mars but could have many other applications on Earth someday. We were in reality testing technologies and using innovations for space to tackle the biggest challenge of our collective lives, and of our planet. As our climate crisis grows, our environments will grow harsher and tools to exist and function outdoors will take on greater importance.

So many technologies that we have come to depend on were borne out of the Space Race. Take satellites; initially, they were developed for communication and, during the Cold War, for monitoring the activities of our foes. Today, however, they have become indispensable tools in monitoring everything from weather to sea-ice formation, greenhouse gas emissions, and forest cover. This MS1 mission opened my eyes to how technology may be a solution—coupled with conservation and improved human behavior— to our current global challenges.