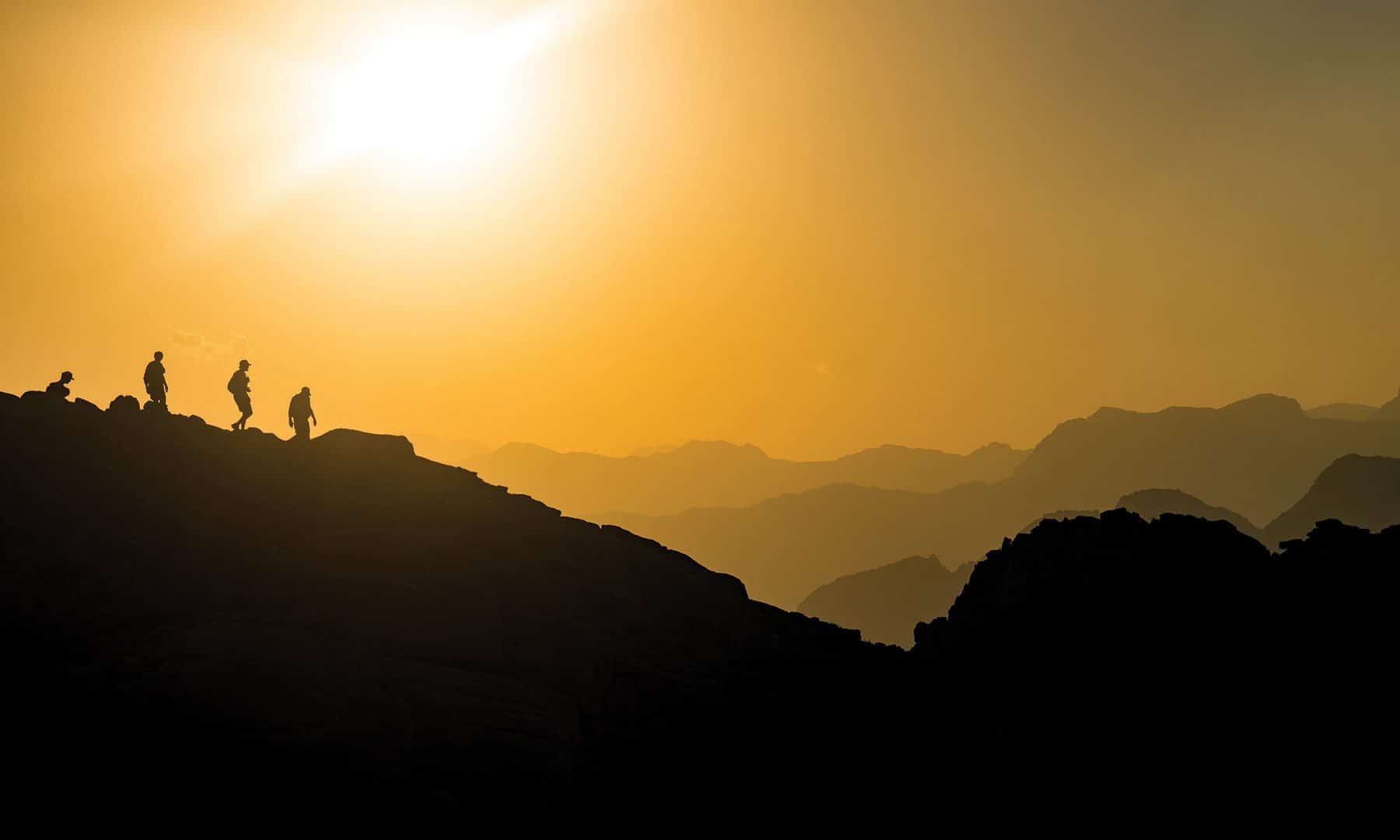 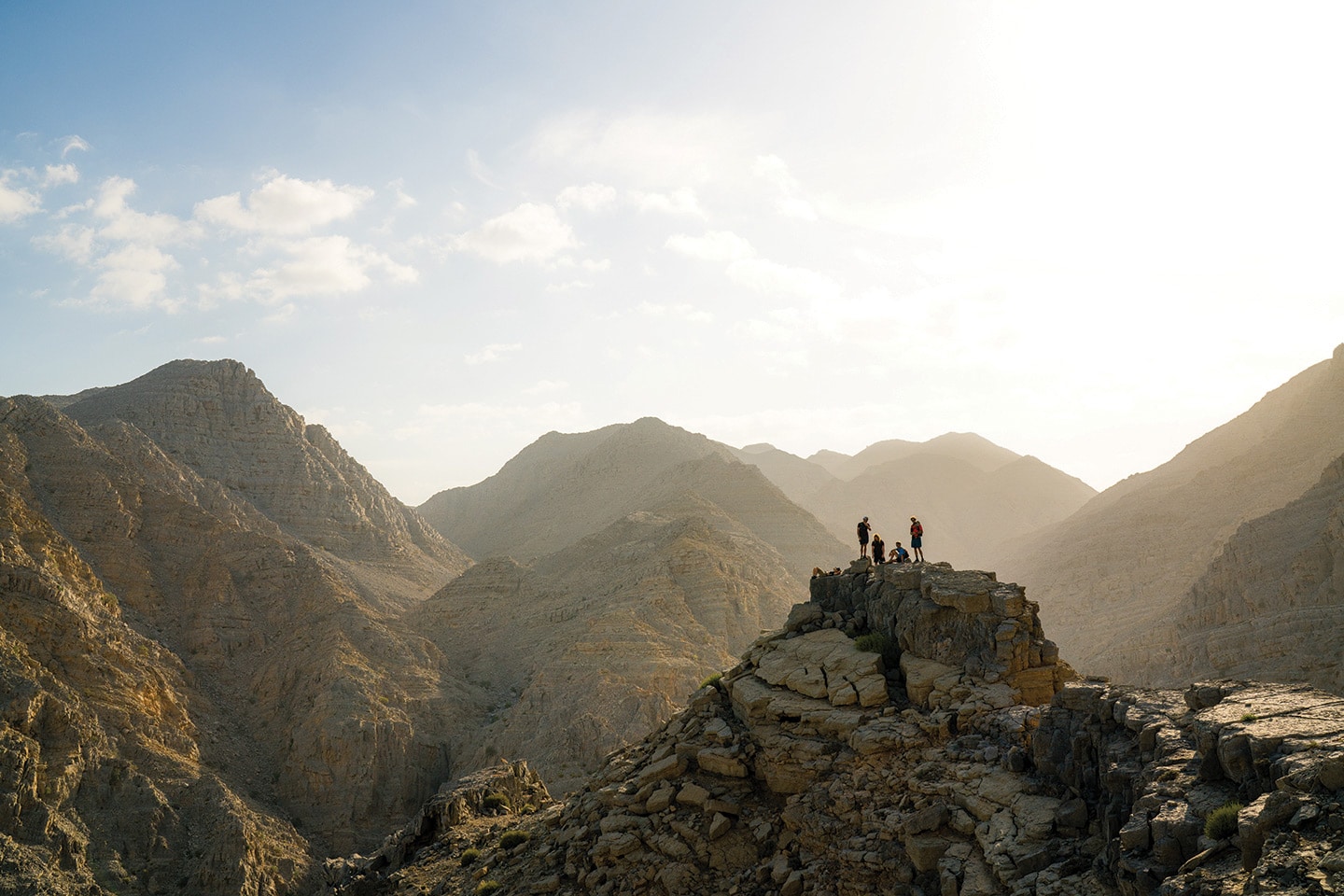 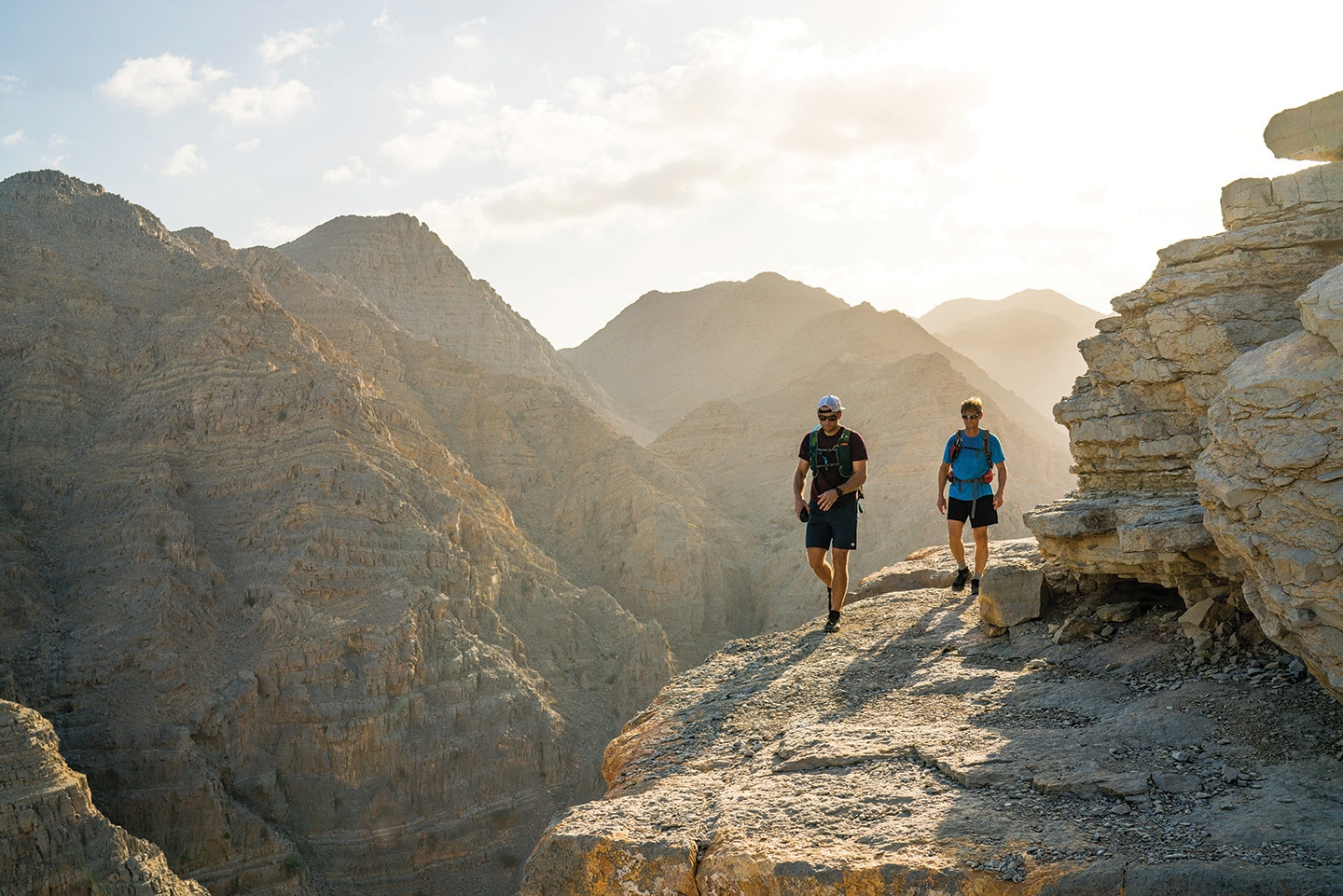 A fellow of the Explorers Club since 2009, Simon Donato is an athlete, author, cinematographer, and entrepreneur who holds a Ph.D. in Geology from McMaster University. In 2008, he created Adventure Science, an organization that pairs adventure athletes with researchers to conduct scientific and humanitarian projects in remote, hard-to-reach locations around the globe. He is best known for his television show Boundless, and his recent book, The Boundless Life.

We were racing the fading daylight as I danced along an alarmingly narrow ledge, no wider than a school ruler. I had left Mike Chambers, our ropes expert, to finish rigging the rappel in order to notify the team that they needed to don their harnesses and prepare to rappel off the cliff band that had become a major impediment to our progress that afternoon. We were five days into our Beyond Roads expedition on Oman’s Musandam Peninsula, where our goal was to complete a 100-kilometer north-south traverse of the road-less and mountainous peninsula in order to identify and describe archaeological sites located in the highlands along this rugged route.

The team was pressed to a cliff-face some 30 meters above anything resembling a flat spot, and I implored the group not to move unless absolutely necessary. Once we had created our anchors and dropped the line, we’d bring them over one at a time. It wasn’t the narrow width of the ledge that worried me for our safety; it was the ever so slight dip to it coupled with a veneer of loose rock debris, all of which combined to make it a very dangerous place to stand. I felt the urgency of shepherding the team to the rappel site, where they would abseil the 30 meters down to the relative safety of the steeply dipping wadi, where I hoped we’d be able to downclimb to a small, crescent-shaped beach, a further 600 meters below.

While the exposure of the mountainous terrain was something that we took very seriously, we had always joked that the biggest risk in the Musandam was that, despite being surrounded by water, if we were to die, it would most likely be of thirst. However, seeing the team perched unroped and unanchored on this narrow ledge, where a slip and fall would be fatal, our morbid musings about the region’s absolute lack of fresh water didn’t seem so funny anymore.

This was Adventure Science’s third trip to the peninsula, after being rebuffed twice due to the unforgiving mountainous terrain. Located at the northern tip of Oman, this region is usually accessed via the ancient port city of Khasab, which can be reached by road from Dubai, by air, or by water, the classic approach, and preferably on a dhow, the traditional Omani fishing vessel.

My obsession with exploring the Musandam Peninsula, which forms the southern edge of the Strait of Hormuz, began in 2011 with an eye-opening first attempt, carrying Explorers Club Flag Nº71. At that time, we made several discoveries, but ultimately fell far short of our goal of completing the 100-kilometer traverse. In 2016, we were able to progress further along the peninsula, only to have an injury befall a team member, once again sending us home empty-handed.

This season, we were back with the support of Merrell and a well-chosen team possessing the technical and physical ability to move quickly and safely through this terrain. In addition to mountaineer Mike Chambers, our team included archaeologist Gino Caspari, adventurer Jim Mandelli, athlete and noted stuntwoman Gemita Samarra, and photographers Luis Moreira and Chris Shane.

The geographical location of the peninsula in the Persian Gulf has made it a historically important region, and mariners have plied its waters for millennia, transporting everything from frankincense to crude oil. Despite this, very little known about the history of the people of the Musandam, especially those who once lived in the highland plateau, which is remote and difficult to access. Our discussions with local Kumzari people (those thought to be most closely related to the former farmers of the highlands) didn’t provide much insight into the timing of their occupation beyond their belief that it ended several generations ago. We know that in past centuries, seasonal grain farming occurred in the highlands and that a climate change toward aridity ultimately forced these populations down to the coast permanently.

While there has been archaeological study of sites south of Khasab, there is little published about this region, making it an archaeological frontier. Gino and I were responsible for documenting the archaeological sites that we encountered, ensuring that the team collected photos—land and drone to allow for a novel 3-D mapping of the ruined sites—and ensuring that each site was described in sufficient detail that would allow for subsequent analysis by experts.

We structured the team and daily transects in a way that allowed the athletes to move quickly, exploring for sites that Gino and I would rapidly survey before moving on to the next. While the larger sites tended to correspond with cleared agricultural areas and were visible on satellite images, we were surprised to discover a number of ridgeline cairns of various designs. We also came upon a number of small farms in unexpected locations with what appeared to be defensive features, likely dating to the time of the Portuguese occupation of the region, in the sixteenth and seventeenth centuries.

Our survey method worked exceedingly well in this terrain and we learned that in this region, its hardy past inhabitants built a vast network of farms and villages in the highlands, and left traces of their presence in all but the most vertical terrain.

Over the course of four days, we had climbed, scrambled, and trekked from our starting location on the most northwesterly point of the peninsula to this spot, in anticipation of this, the fifth day, when we would finally push into new terrain, no longer retracing our steps from previous expeditions.

The objective of the day was to figure out a way to overcome Jabal Letub, at 915 meters the tallest mountain in the Musandam, and negotiate the three subsequent peaks that towered over the coastal village of Sibi. If we could negotiate these peaks, we knew that we would succeed in breaking the back of the traverse, as the remaining kilometers were on what appeared to be gentler terrain.

Until our forward progress had been stalled by this steep cliff band, we had moved efficiently, summiting Jabal Letub early in the day and dispatching several other challenging sections as the afternoon wore on. Yet here we were, so close to success, yet still so far away.

Mike and I worked quickly on the cliff edge, ferrying team members down, watching one after the other unclip at the base of the rappel and begin their downward trek in the twilight. As the last member of the team shouted “off-rappel,” I felt awash in relief. The Musandam had presented its final challenge and we had overcome it safely.

Two days later, we became the first Westerners to complete this entire route on foot, reaching Khasab on the seventh day of the expedition, achieving a goal that began in 2011. Perhaps more important, our survey work has contributed to the archaeological discussion surrounding this poorly studied but fascinating and beautiful region.

Over the course of three field seasons, we have visited more than 50 sites throughout the highlands. Based on the architecture and pottery we observed, most of the sites appear to be contemporaneous with each other, and date within the past 500 years, although we have suspicions that one particular style of cairn discovered on this expedition may date to an earlier period. Our hope is that subsequent analysis of the data collected during this expedition, coupled with the 3-D reconstruction of several of the sites we visited, will aid in refining our ideas concerning the timing of occupation in the highlands.

As the first Westerners to document the archaeological sites in the uplands, we hope to encourage full-scale archaeological excavations of the key sites. We also hope greater awareness of the region’s beauty will bolster its tourism industry, as hiking to these sites would make fascinating and rewarding day trips.