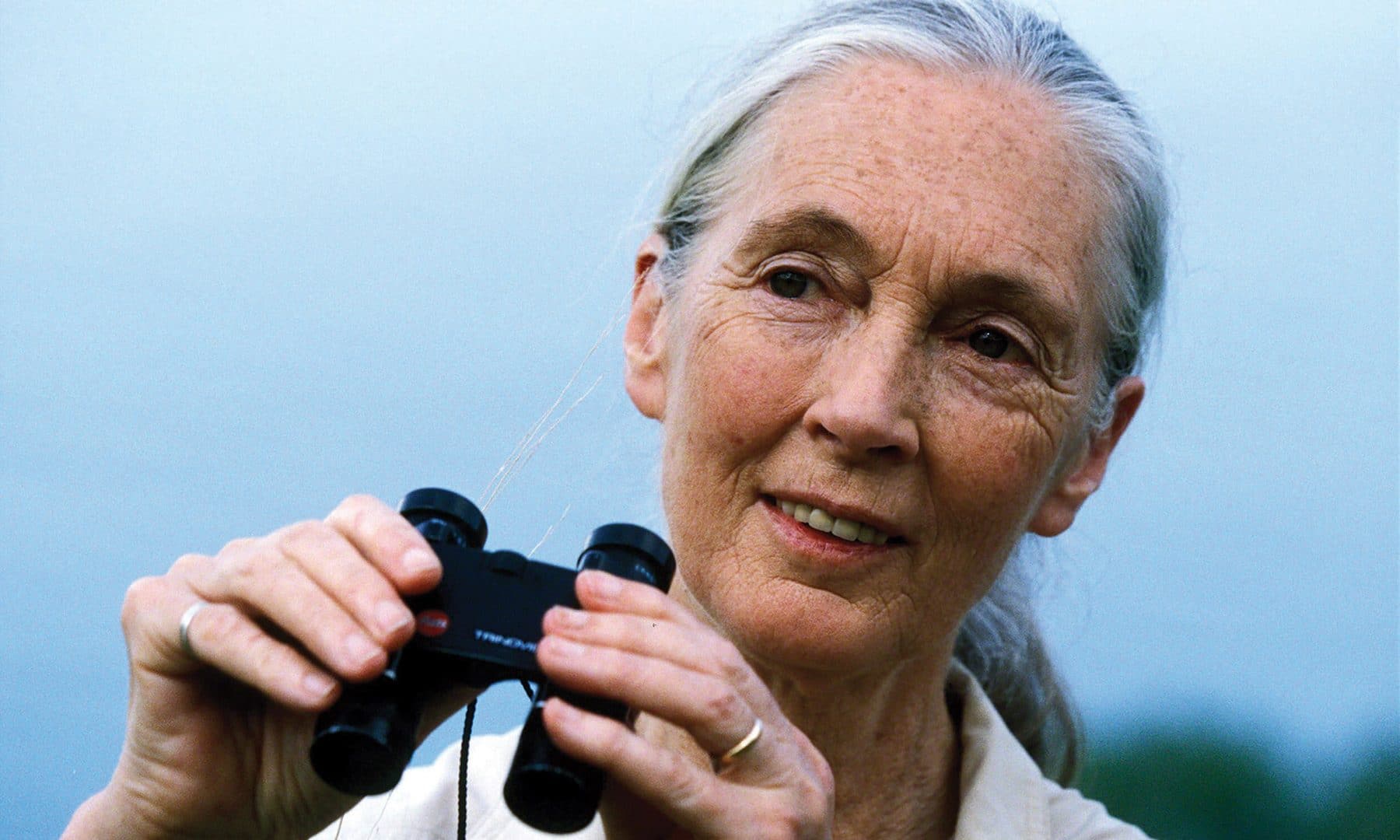 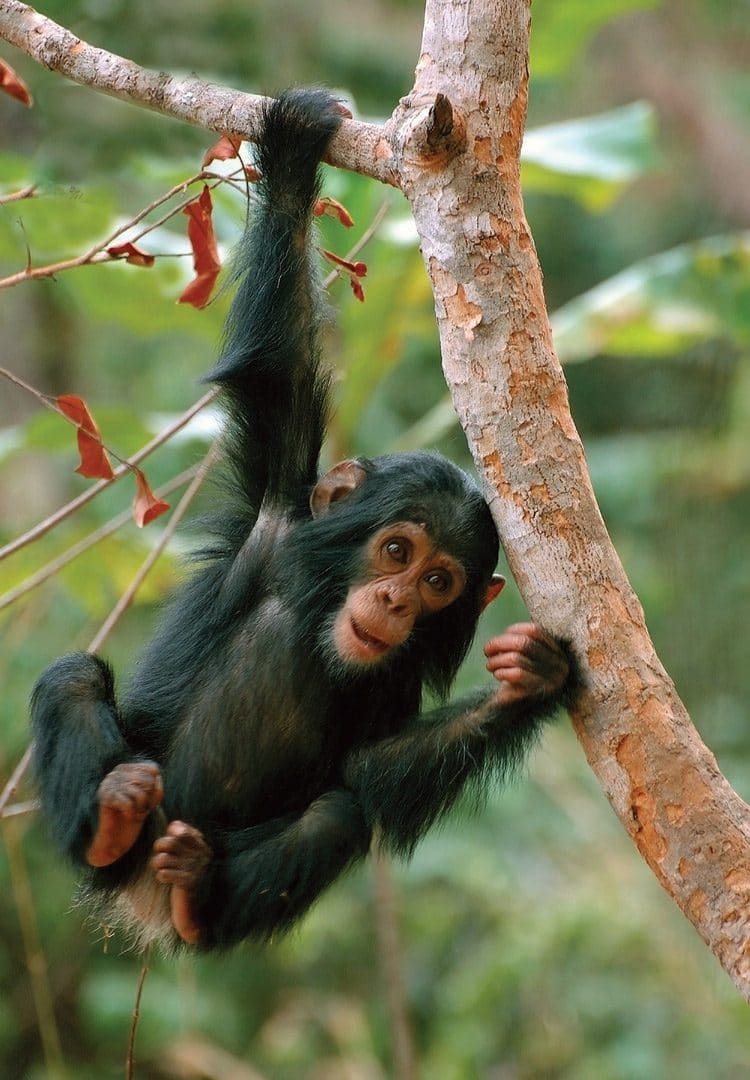 On July 14, 2020, it will be 60 years since 26-year-old British primatologist Jane Goodall arrived at Gombe Stream National Park in Tanzania. Here she began her groundbreaking research into the behavior of wild chimpanzees, Humankind’s closest relative in the animal kingdom. The explorers Journal caught up with Goodall, a Dame of the British Empire, to talk about the trajectory of her career and how her work has shaped our view of the natural world.

THE EXPLORERS JOURNAL: What led you to Africa in the first place?

JANE GOODALL: I fell in love with Africa at the age of eight, after reading about how Doctor Dolittle rescued animals from the circus and took them back to Africa. I was determined to go to Africa and live with wild animals and write books about them even then.

TEJ: You first took to the field at the suggestion of noted paleoanthropologist Louis Leakey. How did you meet him?

JG: When I first went to Africa in 1957—traveling there by boat after a school friend had invited me to Kenya for a holiday—someone said to me that if I was interested in animals, I should meet Dr. Leakey, as he was a prominent paleontologist and archaeologist studying human origins. So I made an appointment to see him at the Coryndon Museum (now the Nairobi National Museum). He took me all round, asked many questions, testing my knowledge, and was clearly impressed. I’d read everything about African wildlife that I could prior to making the journey.

TEJ: What brought you to Gombe and to take up chimpanzees as your subject matter?

JG: After I join Leakey for a three-month summer field season, excavating at Olduvai Gorge (which was then absolutely remote and with so many animals), he asked me if I was prepared to go to a game reserve in Tanzania and study the chimpanzees. He believed that six million years ago, modern humans and modern chimpanzees may have shared a common ancestor—apelike, humanlike. He was able to learn a lot about the physiology of our earliest ancestors from the fossils he had found, but knew little about their behavior as behavior does not fossilize. He thought that if I could identify human behavioral traits in our closest relatives—the chimpanzees—it would help him better understand how our early ancestors behaved.

TEJ: What were your initial questions and research goals when you took to the field?

JG: Simply to find out everything I could about chimpanzees.  No one had studied them in the wild.

TEJ: Tell us about your first encounters with the chimps.

JG: For weeks and weeks when they saw me they ran away.

TEJ: When did you first connect with your study subjects?

JG: One chimpanzee began to lose his fear of me before the others. I named him David Greybeard because of the white beard on his chin.

TEJ: What was David’s position within the hierarchy?

JG: David Greybeard was a leader in the sense that he had a gentle disposition.  He was quick to offer a reassuring hug to youngsters who got involved in some sort of aggressive incident. They would run to him. Other members of the community often followed him when he moved off. But he was not top ranking. His best friend was Goliath, the alpha male.

TEJ: Your were the first to observe tool use among chimpanzees.

JG: I realized that all the chimpanzees in a particular group use tools in similar ways. It is a skill passed on from one generation to the next through observational learning, which is one definition of cultural behavior.  David, like the others, would sometimes move to a clump of tall grass, carefully examine the different stems, pick about six, and carry them all to the termite mound where he was working, or a mound where he was going to work, which was quite out of sight.  This is an example of planning.

TEJ: Why was chimpanzee tool use overlooked for so long?

JG: If people had asked the indigenous people living in forests across the chimpanzee range in Africa, they could have told them that chimpanzees used tools. And there were one or two observations of tool use by European explorers. But because such observations were not made by scientists, they were discounted. Today, of course, we know that many animals, including birds, use tools, and some may even make them. Crows are particularly adept at solving difficult tasks involving tool use. They are even better at it than chimpanzees and human children.

TEJ: Your methods were considered controversial at the time. Why was that?

JG: Prior to my arrival at Cambridge University, where I did my PhD in ethnology, I had never even been to college. Naturally, I was quite nervous. (Leakey said there was no time for me to get an undergraduate degree first, I needed to be in the forest.) So you can imagine my dismay when many of the professors told me I had done everything wrong. First, they said, giving the chimps names rather than numbers was not “good science.” Second, I was not to talk about them having personalities, or minds capable of problem solving, or emotions such as contentment, sadness, frustration, anger, despair, or even fear. For only we humans had these characteristics. Fortunately, I had a wonderful teacher when I was a child who taught me that, in this respect, those professors were absolutely wrong. That teacher was my dog, Rusty. Anyone who has shared their life in a meaningful way with an animal—be it a dog, cat, rabbit, guinea pig, horse, pig, or bird—knows perfectly well that we humans are not the only beings who have personalities, intellect, and emotions.  We are not the only sapient, sentient beings on the planet. We are not, as was taught back in the early sixties, different in kind from other animals. We are, in fact, part of and not separate from the animal kingdom.

Luckily, the observations I was making about chimpanzee behavior, combined with Hugo [van Lawick]’s photographs and films, forced science out of that reductionist way of thinking. Today, most study animals are named, and students are studying animal intelligence, personality, and emotions.

TEJ: Knowing what you know now, would you have changed your approach to research in any way?

JG: No. I made mistakes, but learned from them. Today, we would not encourage the chimpanzees to visit a banana-feeding station, as we know that they can catch our infectious diseases. But back then, feeding stations were accepted. It enabled Hugo to get good-quality photos and film to satisfy National Geographic’s need for illustrating articles in their magazine and producing documentaries. Without these assets, we would almost certainly have lost their support. If that had happened, it is more than likely that the small Gombe Stream National Park and our research would have been lost and the chimpanzees would not have survived. So the approach I took then, which we would never do now, was right for its time.

TEJ: Clearly, climate change is upon us and we are running out of time. What are you doing currently as an activist?

JG: I have seen the effects of a warming planet everywhere. Melting ice and permafrost; changing weather patterns; more frequent and powerful hurricanes, typhoons, and so on; longer droughts; and disastrous flooding. And think of the recent wild fires, especially the devastating fires in Australia.

In 1991, I started the Jane Goodall Institute’s Roots & Shoots, an environmental and humanitarian program for youth. It’s in more than 60 countries worldwide and has been in more than 100 since it started. Its main message: every individual makes a difference every day and we can choose what sort of difference we make. We can make ethical choices in what we buy: did its production harm the environment, inflict cruelty on animals, or is it cheap because of child slave labor? Except those living in poverty often cannot make such choices. They simply have to do what they do to survive. Each Roots & Shoots group chooses at least three projects: one of which is to help people, one to help other animals, and one to help the environment. I grow this program wherever I go, and I’m on the road 300 days a year. Today, young people—from kindergartners to post-docs—are rolling up their sleeves and working on their chosen projects. I just helped to launch the Trillion Trees challenge at Davos, which Roots & Shoots groups will contribute to. That is the number of trees needed to absorb all the excess CO2 that we are pumping out into the environment through our reckless burning of fossil fuels. But I am stressing that it is even more important to protect existing forests and woodlands. It will take time for trees planted now to grow big enough to absorb a meaningful amount of CO2. This is a lot of what the Jane Goodall Institute does through working with local communities in our Lake Tanganyika Catchment Reforestation and Education (TACARE) conservation program. The planting and protecting of trees only buys us a little time while the scientists develop the technologies needed to allow us to stop our dependence on fossil fuels.

In every lecture I give, I talk about the need to clean up the oceans and the need to move to a plant-based diet because of the unspeakable cruelty of the factory farms: the clearing of forests to grow the grain to feed them and the fact that during their digestion they produce methane gas, a very virulent greenhouse gas. And, of course, the need to change modern industrial farming, that is poisoning the land, wildlife, and even ourselves, with chemical pesticides and herbicides.

TEJ: What can explorers—with their greater knowledge of the world—do to help?

JG: Write articles and books and make documentaries about their experiences to share with the general public. Tell stories that will help people to understand the importance of saving the environment, and help them to understand the true nature of animals.

TEJ: What advice do you have for up-and-coming researchers in the wildlife arena?

JG: First of all, you really have to be passionate. Funds for such research are drying up and there is a lot of competition. I would recommend that you get some experience as a volunteer in a field station. If this confirms for you that this is what you really, really want to do, then, as my mother told me, work really hard, take advantage of all opportunities, and don’t give up.

TEJ: What has been the greatest takeaway from your 60 years at Gombe?

JG: That we humans have been very arrogant in thinking that we are a species apart from the rest of the animal kingdom. And from the chimpanzee research, I have learned how important it is for children—chimpanzee and human alike—to have positive early experiences, knowing that you are surrounded by love and a core group of adults who are supportive and always there for you.